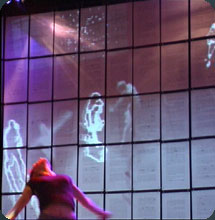 Brother/Sister is an evening-long interactive opera for two dancers, two actors, five musicians (including countertenor and soprano), interactive technology and projections. It tells an emotionally complex story in which a pair of teenage lovers plan and execute a murder of extreme brutality. It is a true story, assembled from filmed interviews (excerpts of which are projected during the piece) — but whose truth is it?